Reports are out claiming that Manchester City defender Bacary Sagna has urged his teammates to bounce back from their disappointing loss against Arsenal. 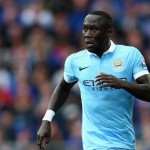 City suffered another huge blow in the title race after going down 2-1 to Arsenal at the Emirates Stadium on Monday night and the defeat leaves the Citizens six points off of top spot in the table.

Sagna was left bitterly disappointed by the manner of the defeat against the Gunners but has urged his teammates not to dwell on the poor result too much.

Sagna told City’s official website: “It’s hard to take, I think we started the game really well, we had possession of the ball, and on their first shot they scored. So it was a bit against the game but we had to keep going to defend well as a team and we conceded before half time.

“So it makes it difficult against a quality team. Now we have to keep our heads up because they are creating a gap. We have to keep the head up, keep working hard and bounce back in the next game.”