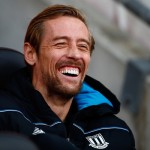 It has been revealed that Stoke City striker Peter Crouch has insisted that Wayne Rooney is still the best striker in the England national team.

Rooney has failed to impress with Manchester United this season and has scored only two goals in 13 appearances for the club.

That form has seen some critics suggest Tottenham’s Harry Kane and Leicester City’s Jamie Vardy have gone past the Three Lions captain but his former national teammate Crouch does not agree.

Ahead of United’s trip to Britannia Stadium on Boxing Day, Stoke’s Crouch said of Rooney: “I think he is our best centre forward.

“Of course, we have some good young players coming through but his experience of playing in big competitions will be invaluable.

“For me he is a top class player and someone that we are lucky to have.”