Reports are out claiming that Real Betis are interested in Fiorentina striker Giuseppe Rossi. 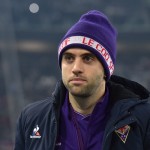 The former Manchester United striker has been linked with a move away from Florence in January.

The Italy international is a former Villarreal player and AS says Real Betis sporting director Eduardo Macià is anxious to secure the services of the 28 year old.

Rossi is convinced that a return to Spain could be the factor that kick-starts his career.