It has been reported that Newcastle United striker Ayoze Perez says he’s a target for Manchester United and Tottenham. 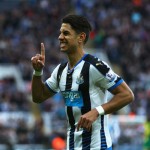 But the 22-year-old has said he will reject their interest and remain on Tyneside as he looks to guide Newcastle away from the relegation zone.

“There is truth in the talk about interest in me. It’s rewarding for me,” he told Radio Club Tenerife.

“There is much truth in the interest from Tottenham and Man United, but my place is at Newcastle.”

Perez had said earlier this month that he was happy to be linked with bigger sides and suggested that he could consider a departure from St James’ Park, warning that “football takes many turns”.