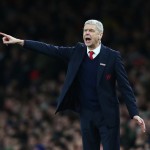 Both attackers are in line for new deals, but Wenger says they’ll have to wait.

“We’ll deal with that later in the season.

“We focus on the present, we deal with that at the end of May,” said Wenger.