It has been reported that Jose Mourinho wants Manchester United to sign PSG striker Edinson Cavani in January. 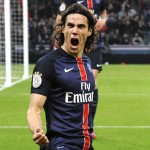 The Daily Star says if he lands the United post, Mourinho will urge the board to go for Cavani.

Cavani, 28, became the most expensive signing in French football history when he joined PSG from Napoli in 2013 for €64.5m.

He has scored 44 goals in 88 Ligue 1 appearances and helped the French giants to two domestic titles, two League Cups and one French Cup.

But despite his success the Uruguay international has never fully settled at PSG after spending long spells playing second fiddle to Sweden sensation Zlatan Ibrahimovic.

He would relish the chance to team-up with Mourinho at Old Trafford and the former Chelsea boss reckons Cavani would help him turn the United into champions again. Sergio Romero On The Verge Of Joining Manchester United