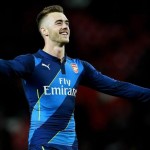 Reports are out claiming that Arsenal defender Calum Chambers is set to return to Southampton.

The Sun says Chambers is set to join former club Southampton on a six-month loan deal in January.

Arsene Wenger is keen for the 20-year-old to gain experience as he has made just six Premier League appearances this season.

The England international will bolster Ronald Koeman’s defence who is wants to take Chambers for the entirety of next year should the initial spell be successful.