Reports are out claiming that Barcelona striker Luis Suarez is set to be handed a new contract. 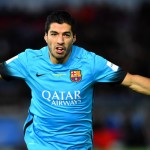 The Brazilian’s deal is expected to be worth around €30 million-a-year – and Suarez, currently, is on half that.

Barca recognise they will have to increase Suarez’s salary to keep him happy.

The Uruguayan is being linked with Manchester City for next season as part of Pep Guardiola’s shopping plans. Suarez’s agent is Guardiola’s brother.