Reports are out claiming that Arsenal ace Olivier Giroud says his lower league education was the making of him. 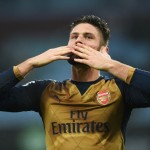 The French international striker played in the second and third tiers of French league for Grenoble, Istres and Tours before signing for Montpellier in 2010 and finished top scorer in their title-winning season two years later.

“It is harder to get noticed when you come from a small club but it’s all about playing and when you don’t get your chance, you need to go to another club to get enough playing time,” he told Arsenal Player. “I succeeded in doing that on loan and I always used to score goals. Afterwards I succeeded step by step to play better and better and reach my level today.

“I thought I could play at this level when I played for Montpellier and won the league. I wanted to reach this level then and today I am proud of that. I don’t want to stop here and I always want more because when all this stops I don’t want to regret anything. I really want to give everything to my limit.

“When I look back at these tough moments it helps me be positive and look forward. It definitely made me stronger and even if it was the beginning of my career when I didn’t get my chance, I didn’t play too much but it was because I was young. When I played more and more afterwards I started to score more goals. I always used to score so that’s when you improve and take your confidence to a higher level.

“I have an expression in French. It means the road of success is never finished. You always have to prove to yourself and others that you are competitive and can give your best. It’s a sport and you have to give everything. We live from our passion because we are really lucky, but it’s even more enjoyable for me because I had a different path to all of those players.” Arsenal Take A Chance On Paulista’s Lack Of English