It has been reported that Bayern Munich coach Pep Guardiola has told friends he could join Manchester United. 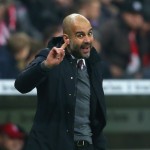 He has told friends he could snub Manchester City in favour of joining their bitter-rivals United instead, reports the Daily Star.

Guardiola is close friends with United ambassador and former boss Sir Alex Ferguson and is attracted to the history and prestige associated with the club.

A source said: “Pep always found the club fascinating. He likes clubs with huge tradition and United certainly have this.

“He won’t be short of options when it comes to deciding his next move and Manchester City are an ambitious club. But United could still prove to be the more attractive proposition.”