It has been revealed that Southampton boss Ronald Koeman says Arsenal are only one of several teams in with a title shot this season. 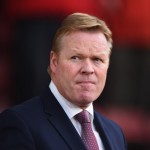 “I think there are more teams. It’s still not halfway in the Premier League,” he said of Arsenal’s title hopes.

“They are looking stronger than last year.

“Maybe now if you watch Arsenal it’s more difficult to win against Arsenal than it was last year.

“I think Arsenal is a little bit different now than it was.

“They still in my opinion is more a counter team than it was before.”

Arsenal Thwarted In Their Interest For Internacional Midfielder Oscar