It has been revealed that Mainz striker Yoshinori Muto is a surprise target for Manchester United. 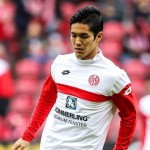 The Daily Star says United have targeted the Mainz striker and are weighing up a £15m bid in January.

Former boss Fergie is a big fan of the Japan international and reckons his pace, eye for goal and ability to hold up the ball could boost Van Gaal’s side.

United have found goals hard to come by this season and Van Gaal is desperate for more firepower.