Reports are out claiming that Arsenal have sounded out Leicester City about a price for Riyad Mahrez. 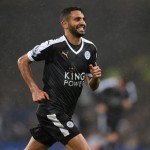 The Daily Star Sunday reported that Arsenal have tried to steal a march on their rivals by making a firm enquiry with Leicester.

Despite their interest, the move is set to end in failure.

Mahrez has indicated that he’s willing to see out the rest of the season with Claudio Ranieri’s high-flying Foxes.

The midfielder had already bagged 14 goals this season.