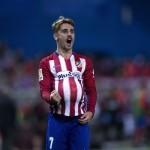 The French international has been linked with Arsenal, Manchester United, PSG and Chelsea.

“He’s enjoying the fans who love him and admire him, and he’s enjoying living in Madrid – all of which comes with being an Atlético de Madrid player.”