Reports are out claiming that Petr Cech has implored his Arsenal teammates not to take Bournemouth lightly this week. 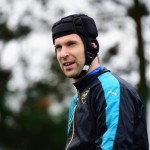 The Gunners take on the ever-improving Cherries at the Emirates Stadium on Monday night and goalkeeper Cech is well aware that Eddie Howe’s men are capable of springing a surprise result on a bigger opponent.

In recent weeks, promoted Bournemouth have beaten both Chelsea and Manchester United and Cech has warned Arsenal they will need to be at their best to avoid a similar fate to that of their usual top four rivals.

“I think in this league if you don’t play well in every game you risk not winning,” Cech told Arsenal Player.

“You look at the table and realise they [Bournemouth] are behind in terms of points but there are so many games where they could have got points, and they could have even won the game but they end up losing by not having a bit of luck or quality.

“All the games you play against them [lower-placed teams] are really tight so you have to take this into consideration that if you don’t play 100 per cent focused and ready you risk dropping points.

“That is what happened in those [Bournemouth] games against Manchester United and Chelsea recently.

“They [Bournemouth] had a really good game and fought for each other and were waiting for their chances.

“Once they were ahead they thought they could get something and then they did really well to see those games out.”