It has been reported that Louis van Gaal did not seem at all fazed by constant murmurings regarding his future as Manchester United manager. 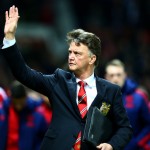 The Red Devils drew 0-0 with Chelsea at Old Trafford on Monday night to make it six Premier League matches without a win, forcing them down to sixth on the table.

Despite sitting in their worst league position at this stage of the season in 26 years, van Gaal was not concerned about his job as he continues to look forward in what has been a below par first half of the 2015/16 campaign.

“I cannot have any influence on that,” he said.

“I can only work with my players and you have seen that the players are fighting for me; they have given a good performance.

“After this result the fans were applauding. I cannot say that I am very much concerned, but in this football world you never know.

“When the players can give such a performance with this lot of pressure then it is not any reason to resign for me.