Reports have emerged claiming that Manchester City are willing to better Lionel Messi’s Barcelona wages to bring him to England. 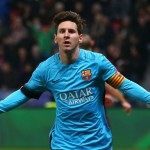 With former Barca coach Pep Guardiola due to arrive in the summer from Bayern Munich, City aim to use his presence to convince Messi about moving to England.

Sport says City representatives have told Messi that he can earn €27 million-a-season. A number that far exceeds the 20m he picks up from FC Barcelona.

In principle it will not be until next season that Barcelona think about renewing Messi’s own deal.

City are not planning on approaching Barcelona until the player gives them the nod.