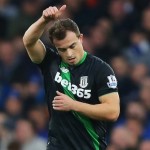 The Swiss international played a key role for the Potters in the pulsating 4-3 win against Everton on Monday night, scoring a top quality brace for his team in the first half of the seven-goal thriller.

The former Bayern Munich and Inter Milan playmaker has taken a little while to adjust to English football but Hughes is confident he is now becoming more comfortable in the surroundings of the Premier League.

“It was only a matter of time that he would score and I think people have seen in recent weeks that he’s been getting to grips with his league,” Hughes said to StokeCity Player following the win.

“He’s starting to learn what opposition players will do to stop his threat, but he is an intelligent footballer and he knows how to affect a game positively.

“He’s done that today not just with his goals, which we are delighted about, but also in his overall general play.

“He has shown a real desire, determination and understanding about what the Premier League is about.”