Reports are out claiming that Ian Wright has come to the defence of Saido Berahino as his future at West Bromwich Albion remains clouded. 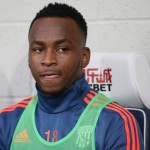 The 22-year-old striker has not started for Tony Pulis since the end of October and it is believed that he could be sold in the January transfer window.

Berahino came on for the final 20 minutes of Albion’s 1-0 win over Newcastle United on Monday night before his mentality was questioned by BBC pundit Gary Lineker but former Arsenal star Wright leapt to the defence of the promising yet controversial talent.

The Gunners legend then indicated perhaps Berahino would be better suited leaving The Hawthorns this winter: “The chemistry doesn’t seem to work.”

The former England U21 international has scored just three goals in a total of 14 league appearances this season which includes only eight starts.