It has been revealed that Manchester United midfielder Ander Herrera was left frustrated by Chelsea goalkeeper Thibaut Courtois in last night’s 0-0 draw. 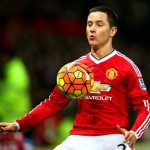 The energetic midfielder latched onto Anthony Martial’s cross from the left and looked certain to score in front of the Stretford End, only for the Blues keeper to pull off an outstanding reflex stop.

It meant more frustration for the Reds as a goalless draw leaves the side in sixth position in the table but Herrera was satisfied with a much-improved overall performance.

“I think I put my foot correctly,” he told MUTV. “I was in the right position. The cross of Anthony, I think, was very good, so I didn’t know if [Cesar] Azpilicueta touched the ball.

“I don’t know what happened, to be honest. I was going to celebrate it and saw the ball was not in. So we cannot complain any more. We showed today we were the better team but it was not enough. We cannot be happy but we can be proud of what we did today. We have to be realistic, we have to win games but this is the way we have to play, I think.”