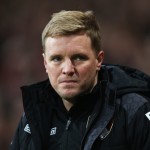 “I would say they have a great chance,” Howe said.

“I didn’t enjoy watching Ozil’s performance because I was the opposition manager but you have to respect what he did.

“The goal he scored was typical Arsenal, there wasn’t a lot we could do about it. I think they are a top side.” Arsenal, Man Utd, Liverpool To Do Battle For William Carvalho