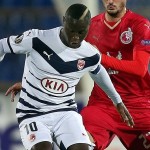 The Daily Mail reported that Newcastle are hopeful of stealing a march on rivals for Bordeaux midfielder Saivet.

The 25-year-old can play as a playmaker or on either wing and has impressed Premier League scouts from Arsenal, Everton, West Brom, Stoke and Southampton this season.

Newcastle hope their French links can sway a deal for the Senegal international who impressed during Bordeaux’s Europa League tie with Liverpool.