Petr Cech has revealed that he left Chelsea for Arsenal convinced they could win the Premier League title. 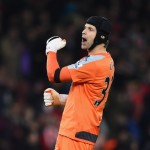 Cech won four league titles in a glittering career at Chelsea before making the toughest decision of his career to quit Stamford Bridge last summer to move to the Emirates.

He said: “It was not an easy decision but I always wanted to go to a team which could win.

“If I didn’t believe that I was going to a team which could win then I don’t know why I would come.

“I play football, not to only enjoy it and I love the challenge of playing and competing with the best players, but I want to have the chance to win games.

“I believe this team has the qualities to win games and hopefully we will manage to go all the way in the league.” Arsenal Set To Miss Out On QPR Goalkeeper Julio Cesar