It has been revealed that former Everton and Manchester United manager David Moyes believes Wayne Rooney will find a way out of his current form slump. 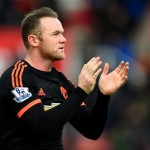 The Red Devils and England skipper has scored just two goals in 15 Premier League outings this season and has often been criticised for his subpar displays which have coincided with a poor run of results at Old Trafford.

Moyes knows Rooney very well having managed him at Everton during his formative years and is confident the 30-year-old will soon rediscover his touch.

“He’s had a long career, he’s been playing since he’s 16, he’s had immense pressure on him since he was a young boy,” said Moyes on ‘The Clare Balding Show’ on BT Sport .

“You talk about the media and you think of the stuff that has been on Wayne all of his career and he has to keep playing and scoring and playing well. Mata Confident Man Utd Can Get The Job Done At Wolfsburg