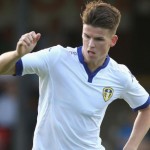 Reports have emerged claiming that Everton are seeking to close a deal for Leeds United fullback Sam Byram.

The Daily Star reported that Everton are looking to tie up a deal for Byram.

The Toffees want to sign the versatile defender next summer when he is out of contract at Elland Road.

Byram, 22, is being targeted by a number of Premier League clubs including Arsenal but Martinez is hoping to convince him to join the Blues, who would have to pay a fee set by a tribunal.