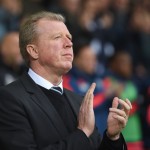 The French tactician has urged the Toon to stand by Steve McClaren.

“It is a long term job. It is impossible to transform a club of that stature in six months. Give him time,” said Wenger.

“Patience is not a quality we have much of in society, but in football you need it.”