Reports have emerged claiming that Arsenal manager Arsene Wenger has said that he has complete faith in Brazilian defender Gabriel Paulista. 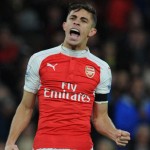 The 25-year-old arrived in a £11million move from Villarreal in January, and since then he has mostly acted as a back-up to the preferred centre-back pairing of Laurent Koscielny and Per Mertesacker.

This season, Gabriel has started seven league games for the Gunners and scored his debut goal for the club in the 2-0 win against Bournemouth on Monday night, further enhancing his credentials as a possible starter in North London.

“I played him in a few games since the start of the season,” Wenger said.

“I play him in training with Koscielny, with Mertesacker, we have three central defenders [and] that will be needed, but how I rotate them I haven’t decided yet.

“I trust him completely. He wants to play more, of course.

“I think as well that he is happy here and I’m sure before the end of the season he will play more games.”