It has been reported that Celta Vigo have scoffed at Arsenal’s offer for Nolito. 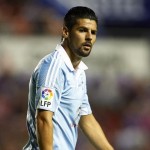 However, Celta have dismissed the proposal, insisting Nolito is worth far much more than the Costa Rican.

Nolito’s buyout clause at Celta is set at €18 million, while they rate Campbell at little more than €5 million.

Celta’s board see the sale of Nolito potentially being the richest in their history.

Arsenal Not Giving Up On Bacary Sagna