Reports are out claiming that Arsenal boss Arsene Wenger has hinted Jack Wilshere could be handed a new contract. 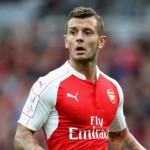 The England international midfielder has not played a single minute of football in the current campaign due to the latest in a long line of ankle injuries.

Nevertheless, Wenger insists Wilshere is likely to be offered fresh terms despite his injury woes.

The 23-year-old enters the final two years of his deal in the summer and when asked about a new deal for Wilshere, the Frenchman replied: “He has two years left and I want Jack to stay here.