It has been reported that Manchester United players believe Diego Simeone could be their next manager. 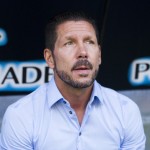 The Atletico Madrid coach has been linked with Chelsea.

However, The Sun says some United players believe Simeone, rather than Jose Mourinho, will be the new boss if Louis an Gaal gets the axe.

The Dutchman is likely to be replaced in the summer, despite having another year left on his contract.

Mourinho had been regarded as favourite to succeed LVG after his dismissal from Chelsea last month.