Reports have emerged claiming that the agent of PSG striker Zlatan Ibrahimovic would like to Swede in the Premier League. 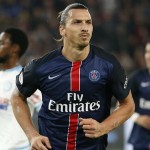 Ibra has been linked with Manchester United and Arsenal this season.

Mino Raiola told Sky Sports News HQ : “I would like to see him in the Premier League,”.

“I think it’s a game that is made for him with his strength. his ability, his technique, the stadiums with fantastic atmosphere and how football is lived.

Raiola is keen to see his client move on but admits it won’t happen this January. He added: “No, he will definitely stay with Paris St Germain until the end of the season.”