Reports have emerged claiming that Arsenal ace Theo Walcott says Laurent Koscielny deserved to be their matchwinner against Newcastle United. 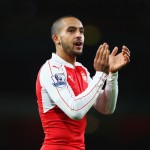 Koscielny turned home from close-range with a little more than 15 minutes remaining to score the 1-0 win.

“He joked that he only scores against Newcastle, but he does produce massive goals at massive moments,” Walcott told the Final Whistle.

“There was a sense that he just lifted his game in the last 30 minutes. I could tell how hard he was working and how much he wanted the team to win. The fact that he goes forward on every corner shows how much of a massive threat he is. He got the goal he deserved and then we managed to hold on with our back four, so it’s another clean sheet for Petr.

“A lot of games have been like that this season. The Premier League is starting to open up a little bit and a lot of teams are ready for the battle this year. The performance wasn’t there to be honest, but the work rate is always there and when you have work rate you always get the success that you need, want and deserve.

“The three points are crucial at this moment in time, especially when teams slip up as well. We’ve had a blip at times but it’s important that we get those hard-fought three points today. In previous seasons we would have lost that or drawn, so that’s a very good sign for 2016.

“The title is anyone’s to be honest but there’s such a belief in this team that we can do it this year. It’s been a long time and everyone understands that, but you could just sense with that performance that we know what we need to do. It’s up for grabs but we have the strength in depth in this squad and I believe that we can push on this season and hopefully be successful.”