Reports are out claiming that Arsenal boss Arsene Wenger was grateful to Petr Cech for their 1-0 win over Newcastle United. 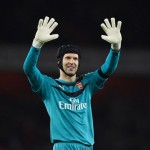 Cech, who broke the record for clean sheets in Monday’s win at Bournemouth was yet again singled out for special praise from his manager on an afternoon where flair players like Mesut Ozil were largely on the periphery.

“He made two big saves,” Wenger said. “One in the first half and one at the beginning of the second, on top of that he gives calm and never panics and today we needed that.”

The defeat leaves Newcastle in the bottom three but manager Steve McClaren was at a loss to explain how his side had managed to leave the Emirates Stadium empty-handed.

“I’m scratching my head as to how we got nothing from the game,” he said.

“Not many teams will do that to Arsenal and not come away with anything. But it’s about putting the ball in the back of the net.

“Cech was the difference, that why he’s been such a great goalkeeper. Goalkeepers can win matches and he certainly won that game.”