Reports are out claiming that Marseille manager Michel has denied claims that his club have plans to sell Michy Batshuayi anytime soon. 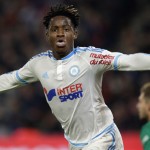 The Belgium international striker continues to be heavily linked with a transfer to the Premier League with Arsenal, Tottenham and Newcastle United showing interest.

However, Michel has made it clear that the 22-year-old former Standard Liege star, who has scored 14 goals for Marseille this term, is going nowhere this winter.

“You want to kill me! I don’t think about Michy leaving,” said Michel when once again quizzed on the future of Batshuayi.

“If we’re going to sign anyone it will be an addition not a replacement.”