It has been reported that Jamie Carragher does not believe Wayne Rooney can still be playing at the very top level in five years’ time. 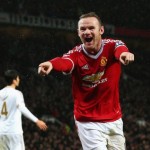 The Manchester United captain has been playing senior football since he was 16 and former Liverpool defender Carragher suggests that a lengthy career has taken it’s toll on the body of the 30-year-old.

Rooney appears to already be feeling the effects of half a lifetime of rigorous Premier League action which indicates to former opponent Carragher that perhaps his time in England’s top flight is limited.

“People talk about age, it’s miles on the clock and it’s games played. He must have played nearly 600 [club] games as a centre-forward, which is maybe not the same as playing in the position I did.

“I just think that battering from centre backs and the pressure that is on him, mentally as well, to play from that age of 16 — I think we are looking at a player who is getting to the stage of his career where I don’t think he will be playing at the top level at 34-35.

“I just think he’s been playing so long now that maybe it’s 30 on his birth certificate but in terms of games played he’s a 35-year-old player.

“I think for Rooney to answer his critics or show he is still the man to play centre-forward for Manchester United he maybe needs a run of 10 games — scoring maybe seven or eight goals.”