Reports have emerged claiming that Serie A clubs are circling Chelsea this month for Branislav Ivanovic. 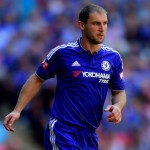 Off contract in June, the Serbia international defender is yet to hear from Chelsea about a new deal.

Ivanovic, says Gazzetta dello Sport, has AC Milan, Fiorentina and Inter Milan all keen to tempt him to Italy.

While Inter and Fiorentina are eager to discuss pre-contract terms with Ivanovic ahead of a Bosman move in June, Milan are willing to go a step further.

Milan are prepared to make a bid this month for Ivanovic.