Reports are out claiming that Olivier Giroud hits back at Alan Shearer’s claims that Arsenal still need three signings in order to claim the Premier League title this season. 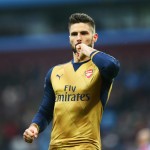 Arsenal managed to consolidate their place at the top of the Premier League table with a hard fought 1-0 victory over Newcastle United during the weekend but despite the result, legendary Magpies striker Shearer stated after the game that the Gunners still need to make signings in order to claim the crown at the end of the season.

However, Giroud vehemently disagrees with Shearer’s views and believes that the current Gunners squad is more than capable of claiming the title in their current state.

“We have very good players as well on the bench, young players waiting to come in. They are very talented. I am not worried about it.

“Danny Welbeck will come back in a month and a half. Theo Walcott can play up front, Joel is Campbell doing well with his national team up front. If I am less good or get injured, we still have a solution.”