Reports are out claiming that Manchester City are launching a mega bid for Schalke star Leroy Sane. 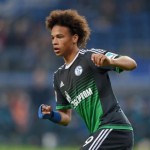 BILD this morning claims that City are tabling a bumper €55 million offer for the young German.

Should Schalke accept City’s bid, it would make the 19 year-old the most expensive German player in history.

The current mark is set at €50 million by Mesut Ozil after his move from Real Madrid to Arsenal in 2013.

“Even Manchester City haven’t got that much money!”