Reports have emerged claiming that fringe players David Ospina and Calum Chambers are set to be handed an opportunity to start for Arsenal in their upcoming FA Cup encounter against Sunderland. 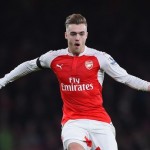 Having consolidated top spot in the Premier League, Arsenal now prepare to focus their attention to the defence of their FA Cup crown when they host the Black Cats in the third round on Saturday.

According to the Daily Mail, manager Arsene Wenger is ready to rest a host of his star players, including Petr Cech and Mesut Ozil, and hand the likes of Ospina and Chambers as well as youngsters Alex Iwobi and Jeff Reine-Adelaide a chance to feature from the start.