Reports are out claiming that Leicester City are facing frustration in their bid for Dynamo Kiev defender Aleksandar Dragovic. 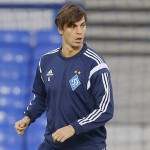 The Daily Mail reported that the Foxes are to pull out of their ambitious bid for Dragovic after the Ukraine club changed the asking price.

Kiev are developing a notorious reputation for being difficult to deal with over transfer fees as Everton found to their cost over Andriy Yarmolenko last summer.

Kiev said they were willing to sell Austria international Dragovic last month with an asking price set at £16m.

Leicester are understood to have offered £12m plus add-ons but Kiev have now changed their mind and said the 24-year-old is worth £25m.

The talented defender is also being monitored by Arsenal. BVB Not Interested In Selling Pierre-Emerick Aubameyang To Arsenal