Reports are out claiming that Liverpool are interested in Schalke attacker Max Meyer. 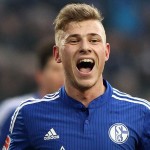 BILD claims that Reds boss Jurgen Klopp has turned his attention to Schalke star Meyer in a bid to cure Liverpool’s creative ills.

The Reds have scored just 22 goals in their opening 20 Premier League games – the worst in their 124-year history.

Klopp has joined AC Milan, Barcelona and Sevilla in the chase for attacking whizz Meyer.

Meyer, who made his Germany debut last year, has three assists and two goals in 16 Bundesliga appearances this season.