Reports have emerged claiming that Chelsea are set to do battle with London rivals Tottenham for Zenit Saint Petersburg’s Axel Witsel. 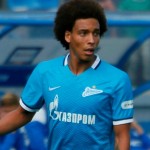 According to the Daily Mail, the Blues are now showing significant interest in the Belgian midfielder who has been heavily linked with Spurs over the past few months.

Chelsea spoke with Witsel in the summer but a deal was not concluded and they are now back in for the 26-year-old who is looking to leave Russia this winter.

It is believed the former Standard Liege and Benfica man is keen on a move to the Premier League, which gives Chelsea positive vibes, but the fact Tottenham are competing for a top-four position and the Blues sit 14th may sway it in the favour of the North Londoners.

Reports suggest Witsel, who is also a target for AC Milan, would command a transfer fee of around £23million.