According to the Daily Mirror, Arsenal are set to bring back goalkeeper Wojciech Szczesny from his loan spell at AS Roma next season. 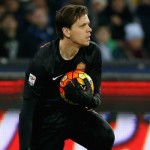 Gunners manager Arsene Wenger still believes that the Poland international has a career at the Emirates Stadium and wants him to deputise Petr Cech next campaign.

The North London club have already informed Roma of their intentions.

Arsenal’s current second-choice goalkeeper David Ospina is expected to leave on a permanent transfer this winter or in the summer.