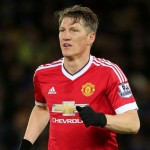 The German international was suspended after video evidence of the incident – which had gone unpunished during the match in question – was reviewed by a three-man panel of referees.

The Daily Mirror is reporting van Gaal’s gripe is a result of the perceived double standards that saw Stoke City defender Geoff Cameron successfully appeal the red card he received for violent conduct against West Bromwich Albion on the weekend.

Cameron’s appeal was heard by a three-man panel consisting of a former player, manager and referee and those at United believes the differences in judicial process has basically mocked the system.