Reports are out claiming that Arsenal legend Thierry Henry is delighted being back at London Colney. 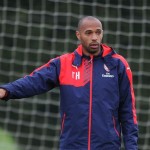 Henry – who scored 228 goals in 377 appearances for the club – is working towards his coaching badges and has returned to London Colney as an assistant to help train the under-18s and under-19s.

“[Arsène Wenger and I] sit sometimes, obviously he has a lot on his plate,” Henry told the Arsenal Magazine. “We speak about training youngsters and how it’s different to training senior players. We talk about being a manager, we talk about players from the academy. I will ask him questions on how to deal with certain situations.

“I’m obtaining my badges right now with the Welsh FA and looking to gain the A-licence. It goes without saying that I asked Arsenal if I could do that with them and be involved with the team.

“I asked the boss and he said to come, train with the under-18s and 19s and help conduct sessions. I’m just an assistant at the minute, I’m not a coach but it’s great, as you can imagine.

“It’s the place I love, there’s so much emotion for me here so this was always going to be where I wanted to start my coaching.”

Arsenal, Liverpool To Do Battle For German Midfielder Sebastian Rode