Reports are out claiming that Crystal Palace are chasing Fulham striker Moussa Dembele. 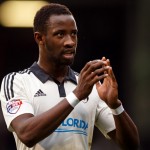 The Daily Mail reported that Crystal Palace and Roma are the latest clubs to show interest in Fulham’s teenage forward Dembele.

The French striker is out of contract in the summer and has also attracted interest from Arsenal, Tottenham, Everton, Manchester United, Paris Saint-Germain, Napoli and Juventus.

Though still raw, clubs recognise Dembele has potential to improve and he has notched 10 goals in 25 appearances for the Championship club this season.