It has been revealed that a move to Manchester United could be back on for Real Madrid captain Sergio Ramos. 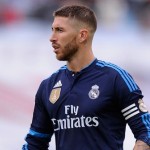 Fichajes reports flamboyant agent Francois Gallardo has suggested Ramos could move to United in the summer.

The centre-back was heavily linked with a move to Old Trafford in the summer but eventually signed a new contract with Real.

However, Real president Florentino Perez is now ready to sell if he receives a bid between £44m and £58.7m as he wants to renovate the squad.

And Gallardo believes Ramos could end up at United, particularly if they appoint Pep Guardiola in the summer.