Reports are out claiming that Arsenal’s Gedion Zelalem has extended his loan deal with Scottish outfit Rangers until the end of the 2015/16 campaign. 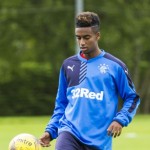 German-born USA U23 international Zelalam has made 12 appearances for Rangers this season to help them into top spot in the Scottish Championship.

The Gunners wished the 18-year-old luck for the remainder of the season as he strives to continue making an impact for Mark Warburton’s promotion-chasing side.