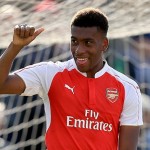 According to the Daily Mail, Championship club Reading are keen on signing Arsenal youngster Alex Iwobi on a loan deal.

The report claims that Royals manager Brian McDermott has identified the 19-year-old forward as a replacement for Nick Blackman, who completed his move to Derby County on Tuesday.

Iwobi has made five appearances for the Gunners this season, with his only start came in the 3-0 League Cup defeat against Sheffield Wednesday.