Reports are out claiming that Arsenal have secured the services of two promising youngsters. 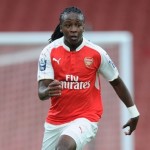 Tafari Moore and Tolaji Bola have both signed contract with the Gunners on what was a positive Wednesday in North London.

18-year-old full-back Moore, who has progressed through the academy ranks, has agreed a new deal with the club while 17-year-old defender Bola has penned his first professional deal.

Both players, who are fellow England schoolboys, are highly-regarded at London Colney and their commitment to the club has the Gunners excited for the future.